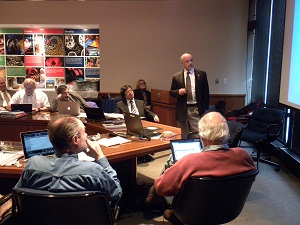 The ongoing ILC R&D programme is supported through the traditional funding to particle physics laboratories and universities: being sponsored by national and regional programmes. This includes receiving funds for test facilities, prototypes and general infrastructures, including salaries for many of the ILC scientists.

Some of the countries involved in the ILC already contribute to an administrative account called the common fund which pays for central ILC functions including administrative and technical support.

In order to begin developing international funding mechanisms for the ILC, a high-level international group comprised of representatives from funding agencies around the world called Funding Agencies for Large Colliders (FALC) been put in place. Further international planning, including preparations for construction, will continue in a similar globally collaborative fashion. The final ILC site location will be determined by a proposal, involving many nations, to host the facility. The international partners will then need to agree on all the necessary procedures.

Send an email to ILC communicators